The Diocese of Vincennes, Indiana, was formed in 1834. The original cathedral of the diocese, St. Francis Xavier, was in Vincennes, which was the earliest population center of the state of Indiana. However, by the late 1800s, Indianapolis had emerged as the most populous city in the diocese. When Francis Silas Chatard was named Bishop of Vincennes in 1878, he took up residence at St. John Church in downtown Indianapolis. Bishop Chatard planned to petition the Vatican to have the seat of the diocese moved to Indianapolis, and envisioned a new cathedral to be located north of downtown, away from the noise and smoke of the industrial and commercial activity. In 1890, Bishop Chatard purchased a lot at the southeast corner of Meridian and 5th (now 14th) streets for the construction of a new cathedral, to be named in honor of Saints Peter and Paul. James Renwick, Jr., who had designed St. Patrick Cathedral and the Smithsonian Institute, was chosen as the architect to design the new cathedral, chapel, and adjoining bishop’s residence.

Construction on the chapel and rectory began on July 15, 1891. The chapel was dedicated on March 25, 1892. The bishop, as well as Msgr. August Bessonies, who had been assigned as the rector, moved into the rectory the following month.

Bishop Chatard purchased additional land adjoining the chapel property in 1894, but could not move forward with the construction of a cathedral until the diocesan see was moved to Indianapolis. Pope Leo XIII granted this request on March 28, 1898. By this time, James Renwick Jr. had died, but his nephew, William Whetten Renwick, created a new cathedral design in 1903, and construction began in August 1905. Though it was incomplete, the cathedral was dedicated privately on December 21, 1906, so that it could be used for Christmas Masses.

Over the next several years, additional fixtures were added to the interior of the cathedral, including the stations of the cross, the organ, side altars, statues, the crucifix on the reredos, and a marble communion rail. The original chapel was remodeled for use as Blessed Sacrament chapel in 1918. 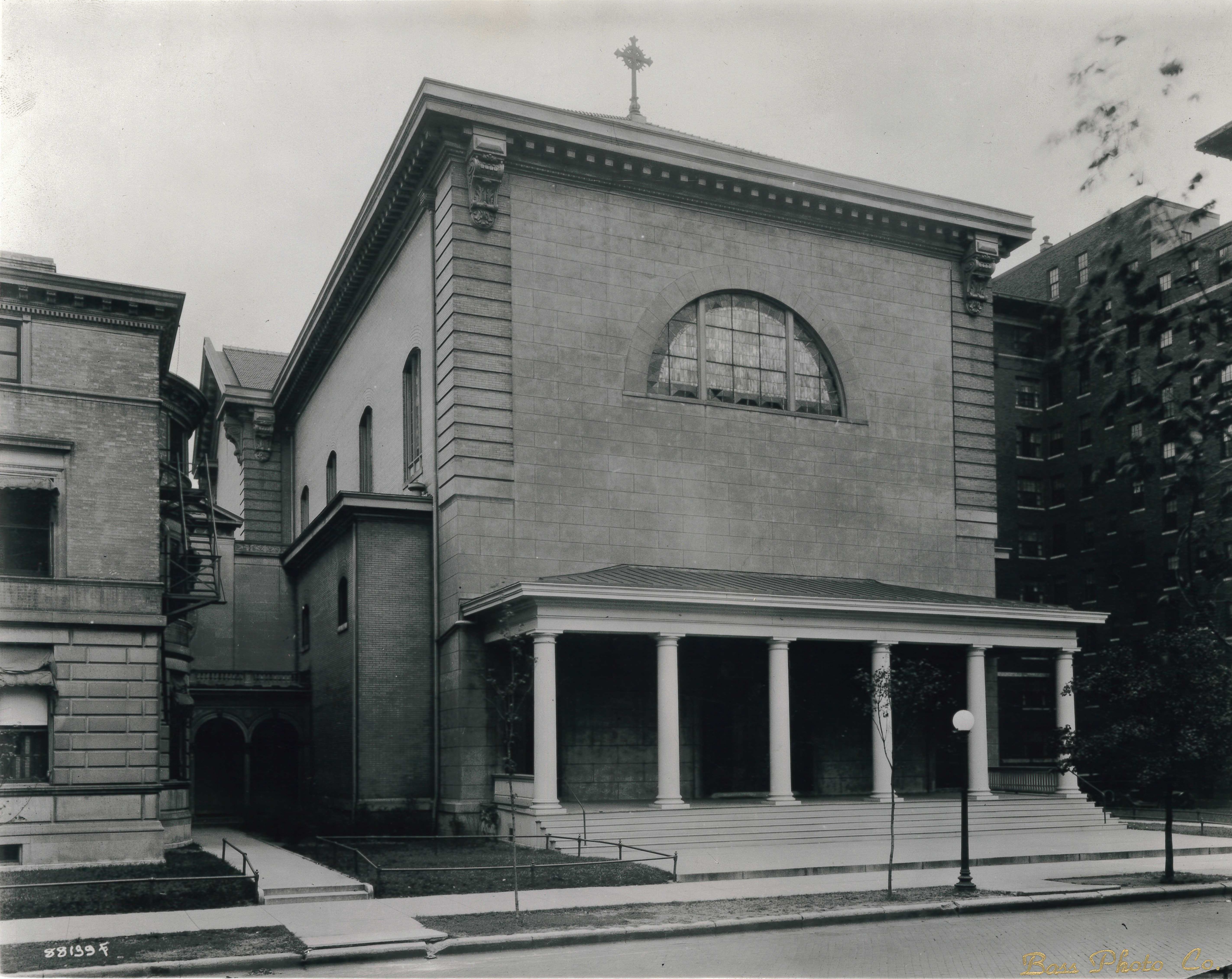 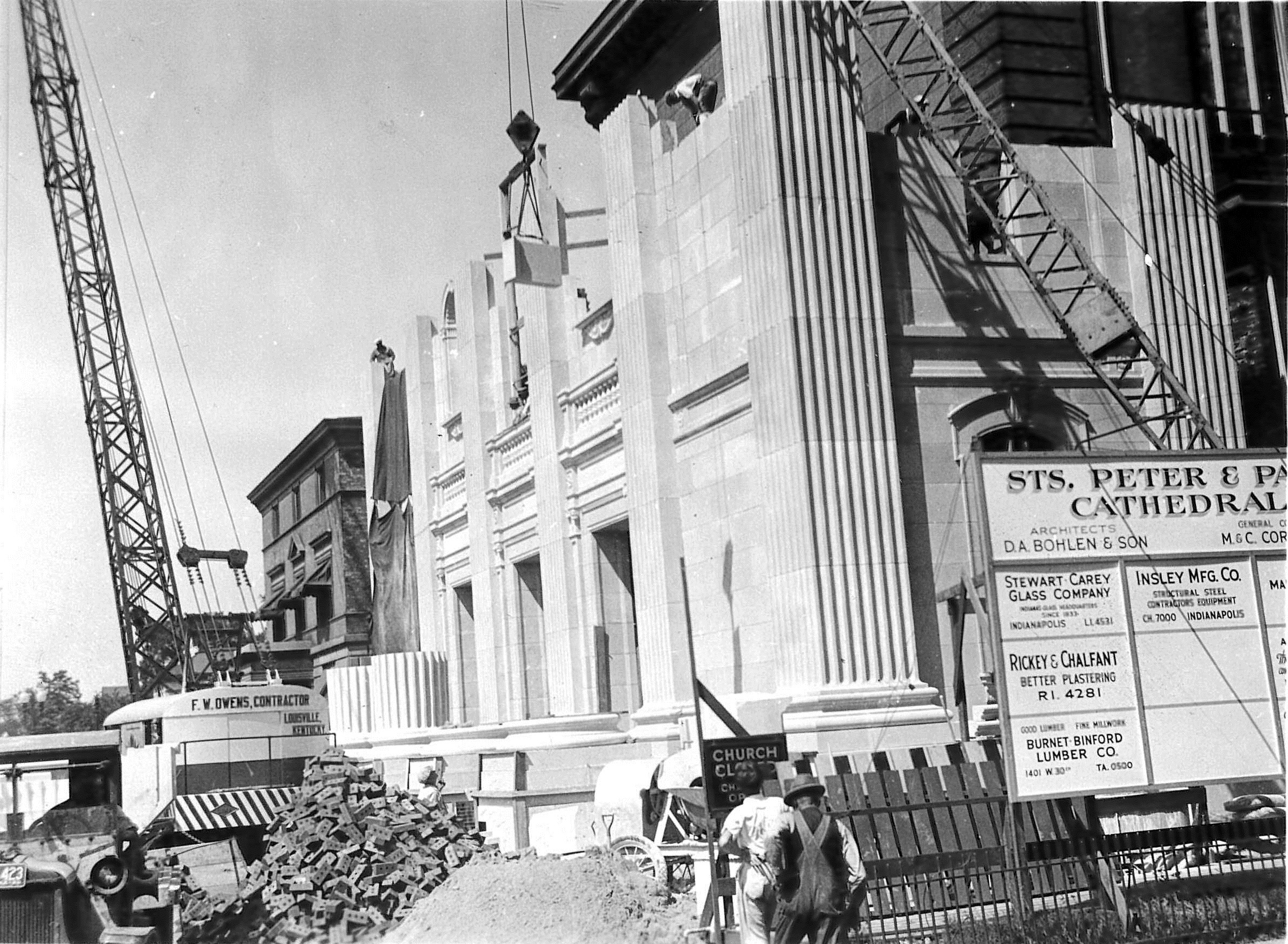 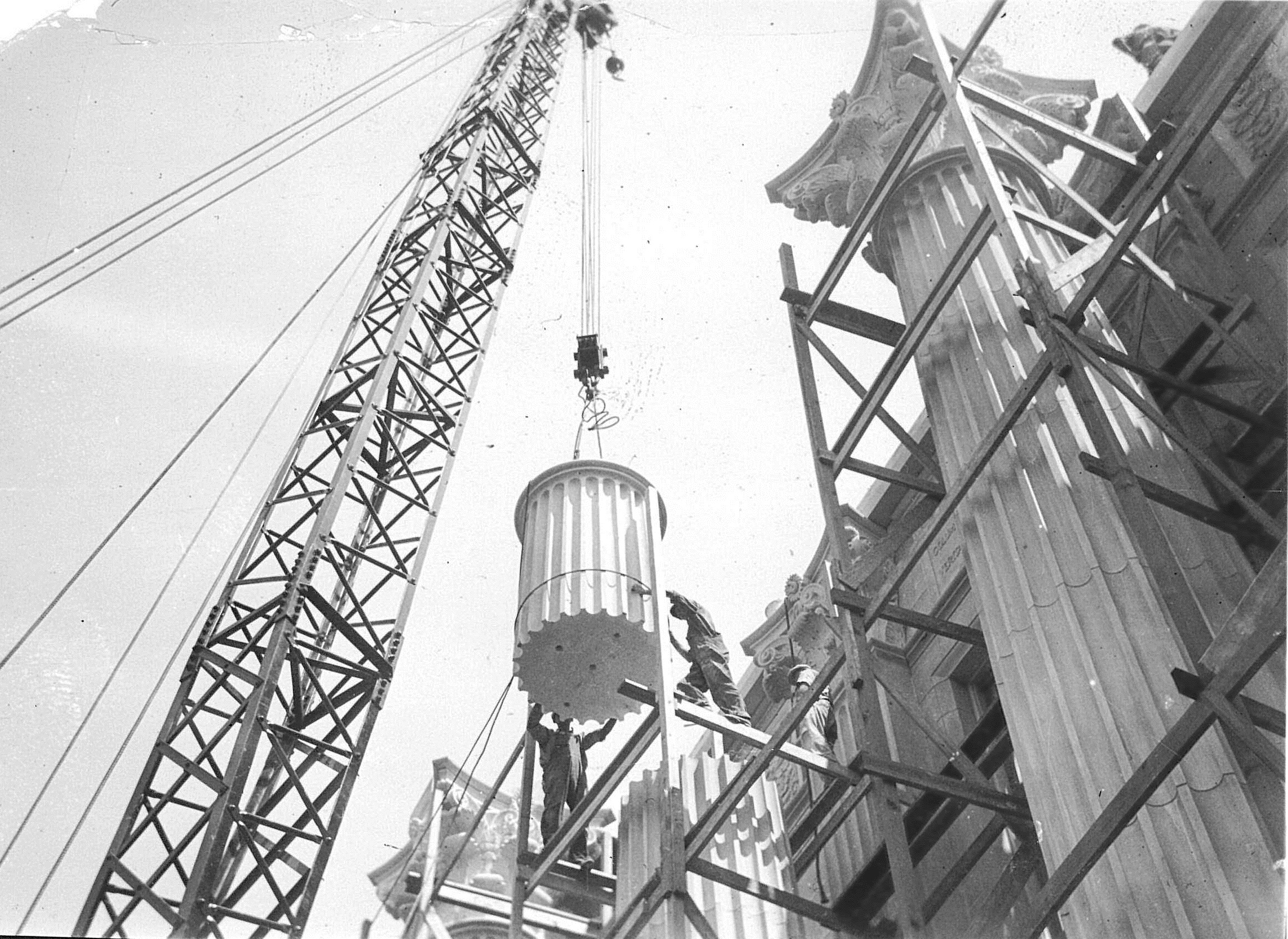 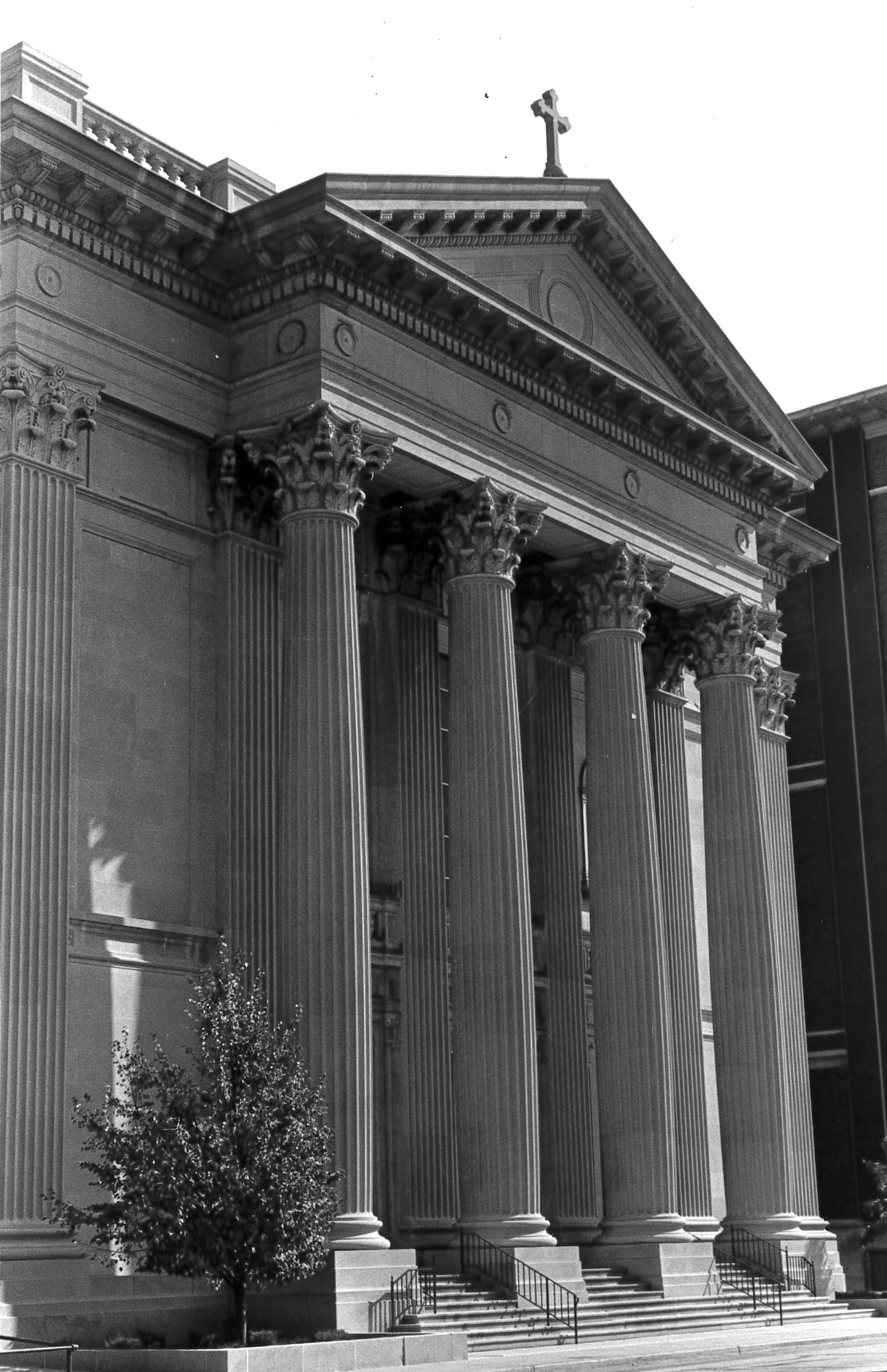 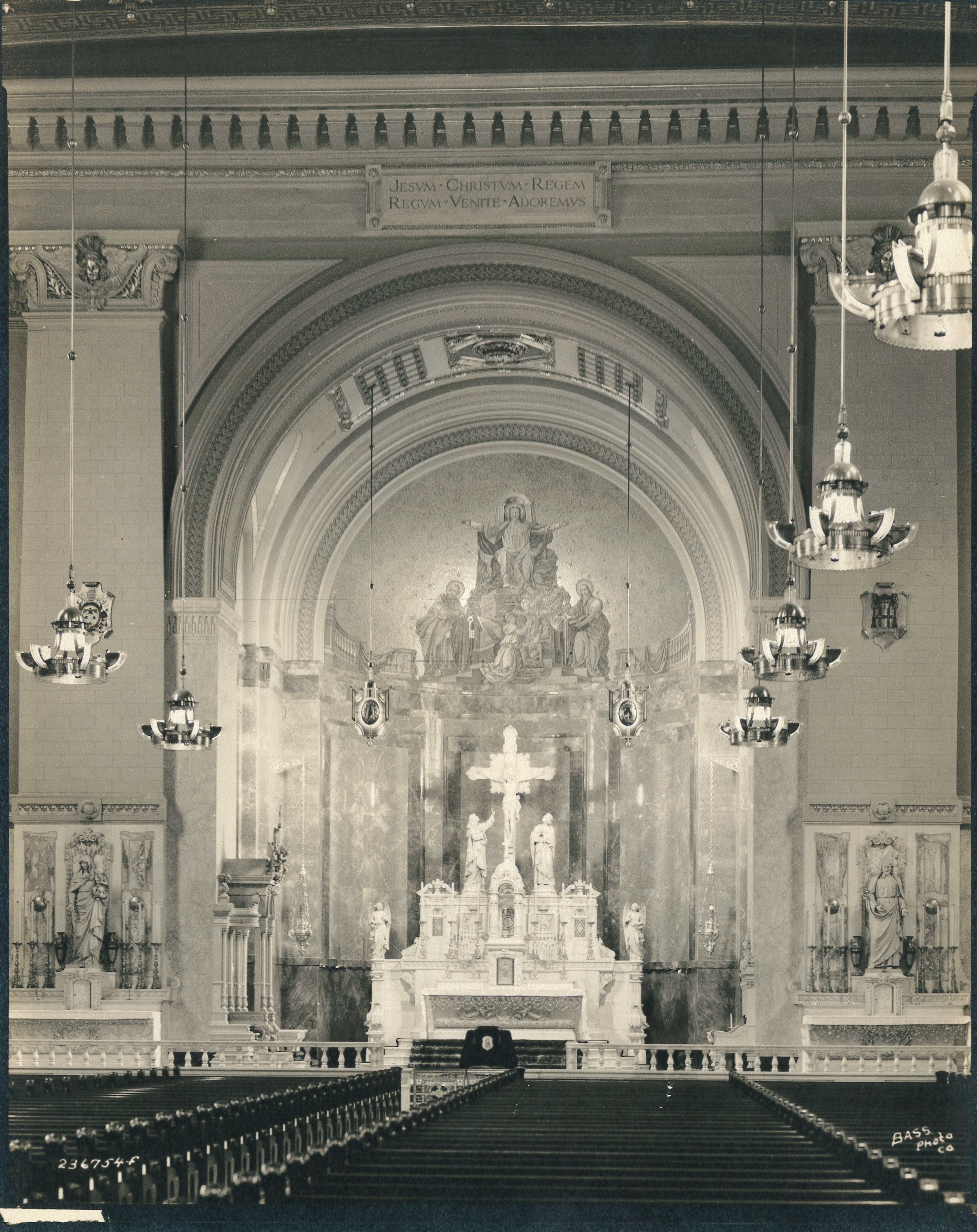 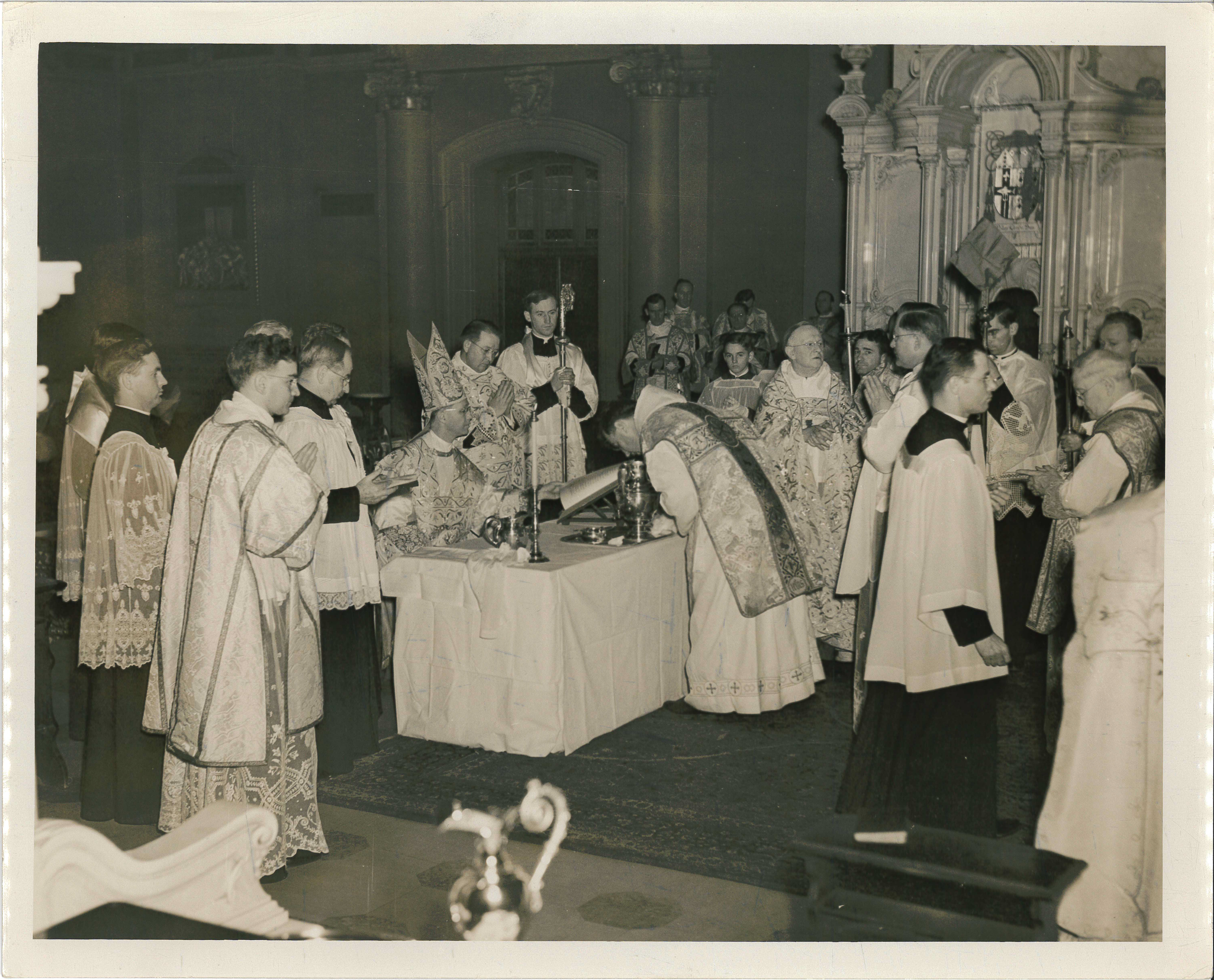 During this time, the cathedral parish became known as a hub of Catholic education in downtown Indianapolis. The Sisters of Providence opened the cathedral school at the site of the old Conduit Mansion adjacent to the cathedral in 1892. In 1912, a new cathedral school was constructed at the corner of 14th and Pennsylvania streets, to the rear of the church. The boys attended classes in this building, while the girls remained in the original building across Meridian Street.

In 1918, Cathedral High School for boys was begun on the second floor of the new building. The high school quickly outgrew this space, and a separate high school building was constructed on the northwest corner of Meridian and 14th Streets in 1922. In that same year, the Conduit Mansion was torn down, and the female students joined their male classmates in the school building located behind the cathedral. A newer building which had been constructed in front of the Conduit Mansion continued as St. Agnes Academy, a high school for girls.

SS. Peter and Paul Cathedral Parish experienced a period of growth after the first world war. The parish membership was 4950 by 1928. The parish was known for a variety of parish organizations, including a chapel club and men’s club. During the tenure of Bishop Chartrand, there was weekly Eucharistic adoration on Fridays from morning until evening.

In 1936, the cathedral underwent its first renovation. The building façade was completed, and the original mural located in the apse was replaced with the current mosaic of Christ the King, flanked by St. Peter and St. Paul. The sanctuary floor was extended and the ceiling in the nave was painted red and gold.

Over time, changing demographics in the city led to the moving or closure of the schools. Due to declining enrollment, the cathedral grade school closed in 1967. The remaining 130 students transferred to nearby Holy Cross School, and the old cathedral grade school was renovated into chancery offices the same year. St. Agnes Academy graduated its final class in 1970 and merged with Ladywood Academy, which was located on the north side of Indianapolis. In 1976, Cathedral High School merged with Ladywood-St. Agnes to form a coeducational high school and moved to the northside campus.

In 1982, the former Cathedral High School building was renovated and renamed as the Catholic Center. Nearly all archdiocesan offices, which had been previously spread throughout the city, were relocated to the Catholic Center. The former grade school was used as the site of the Damien Center from 1987-2006, and now houses the Cathedral Kitchen and Food Pantry ministry. The former St. Agnes Academy building was reconfigured into apartments. 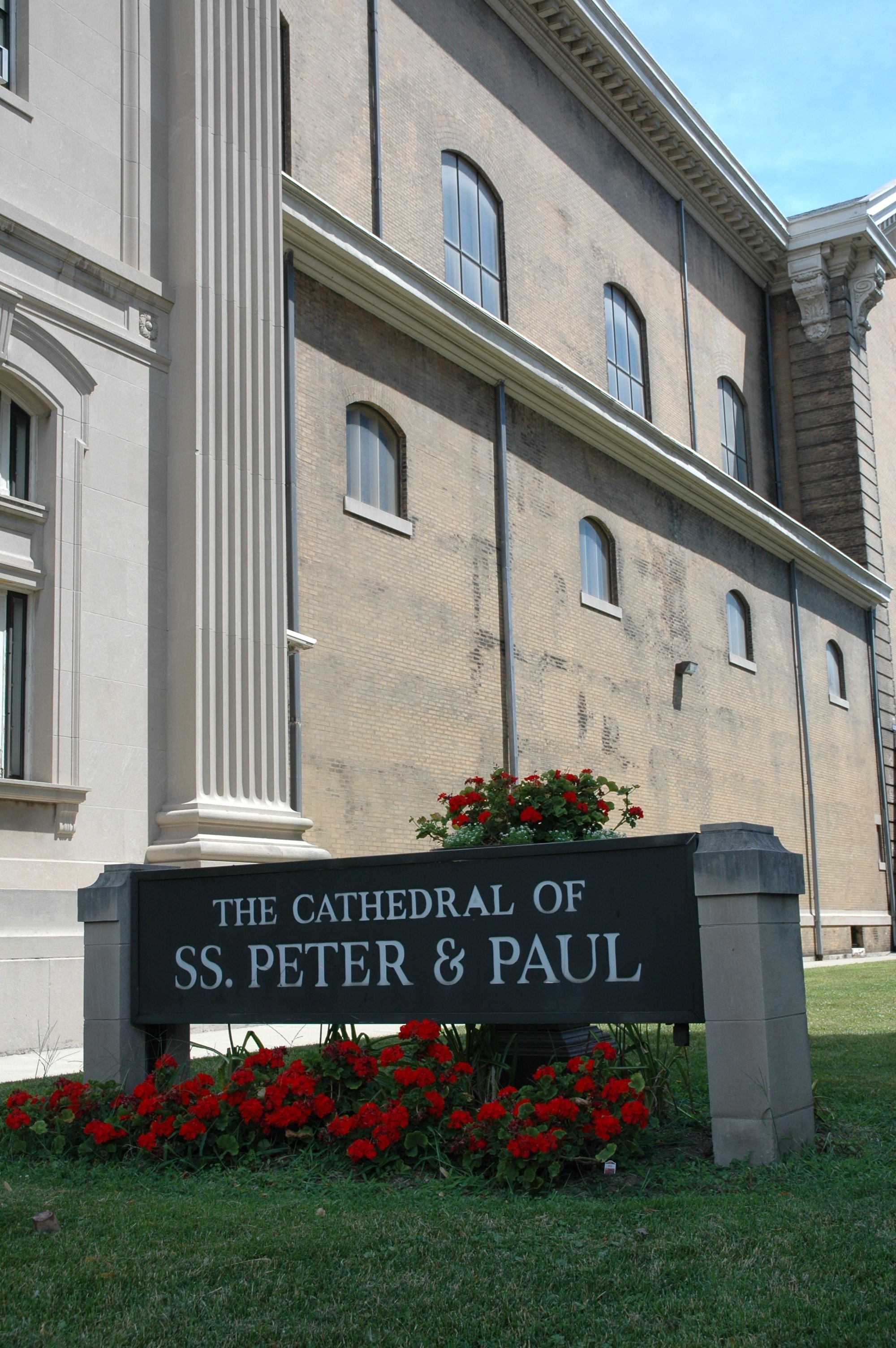 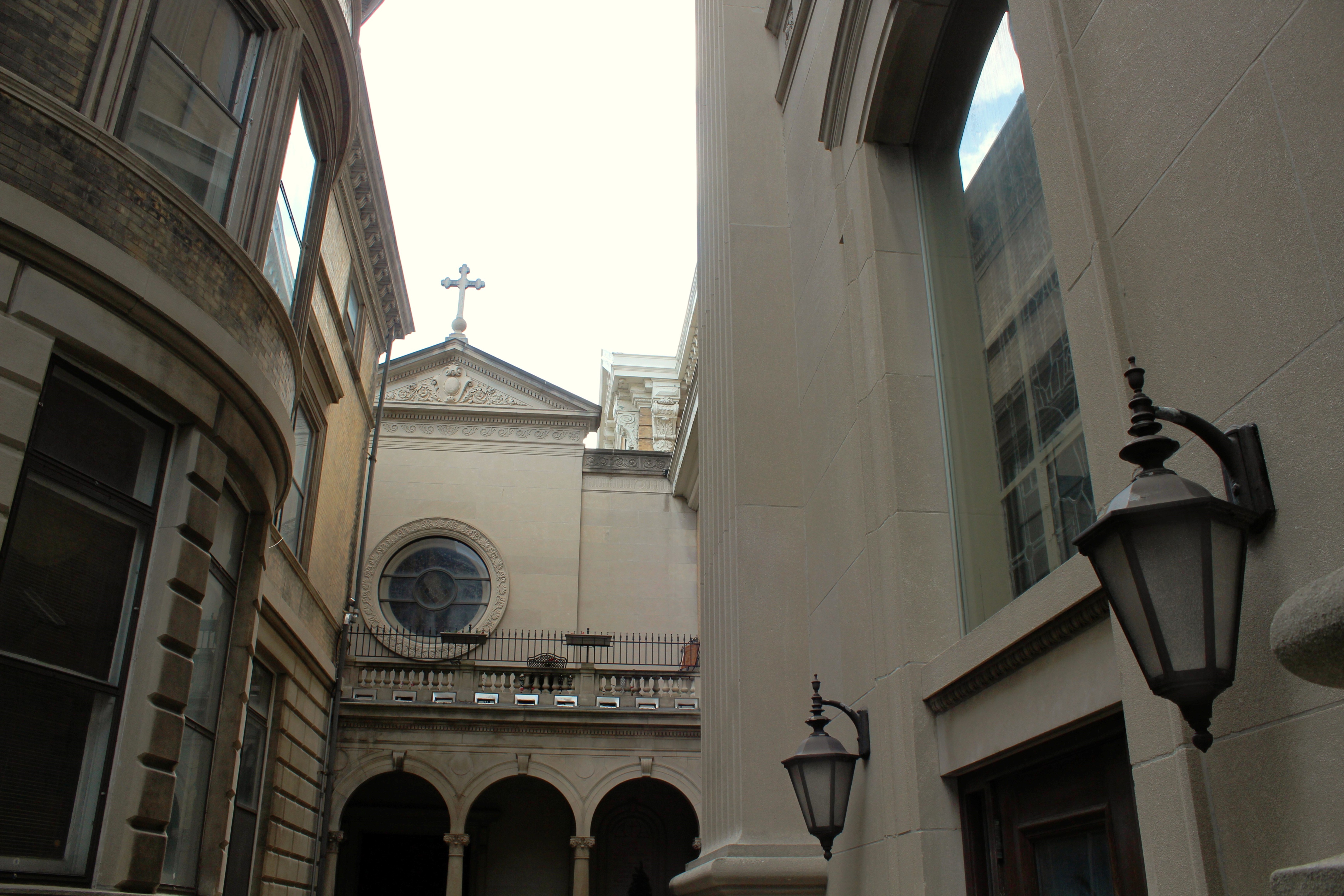 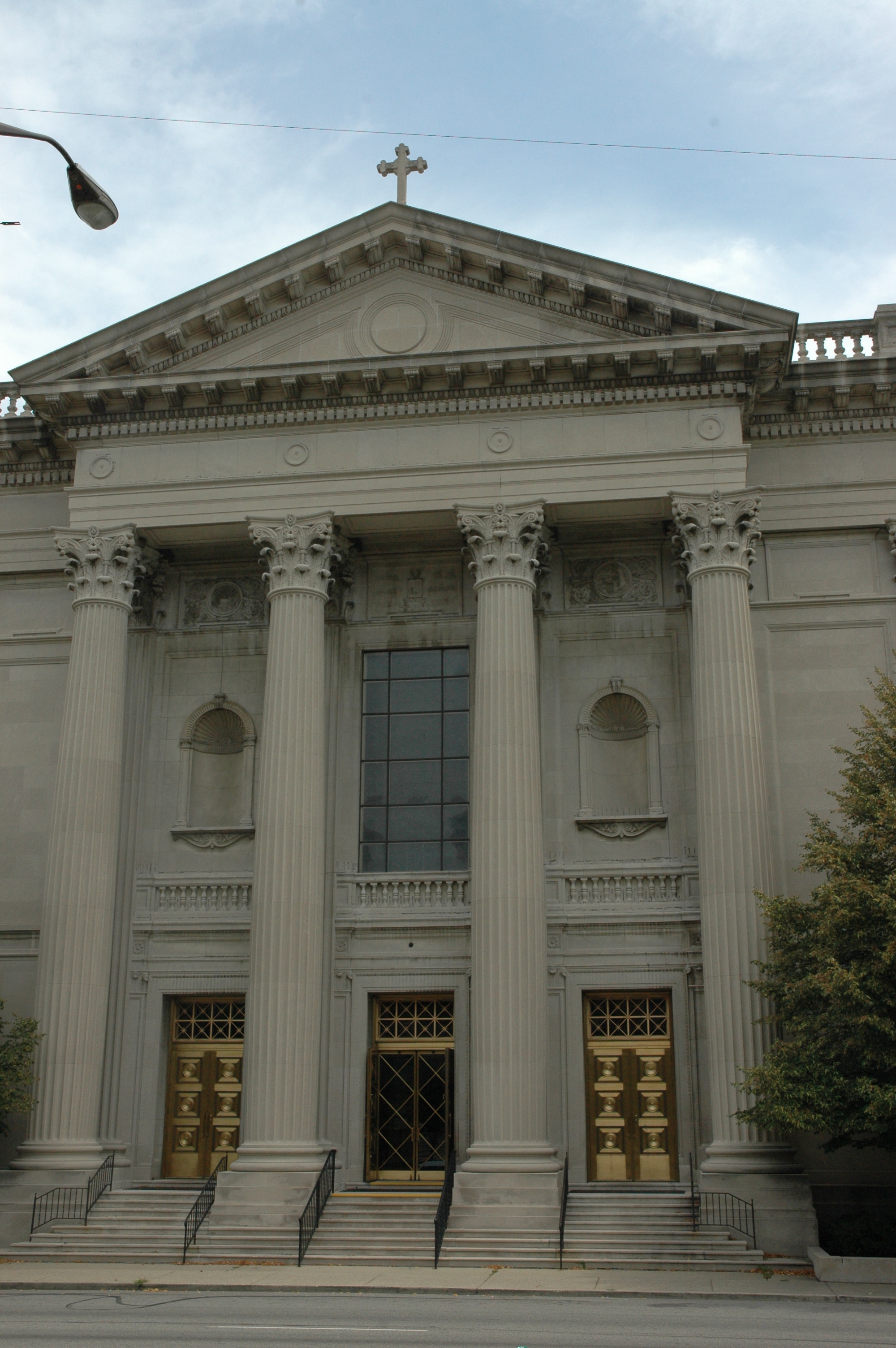 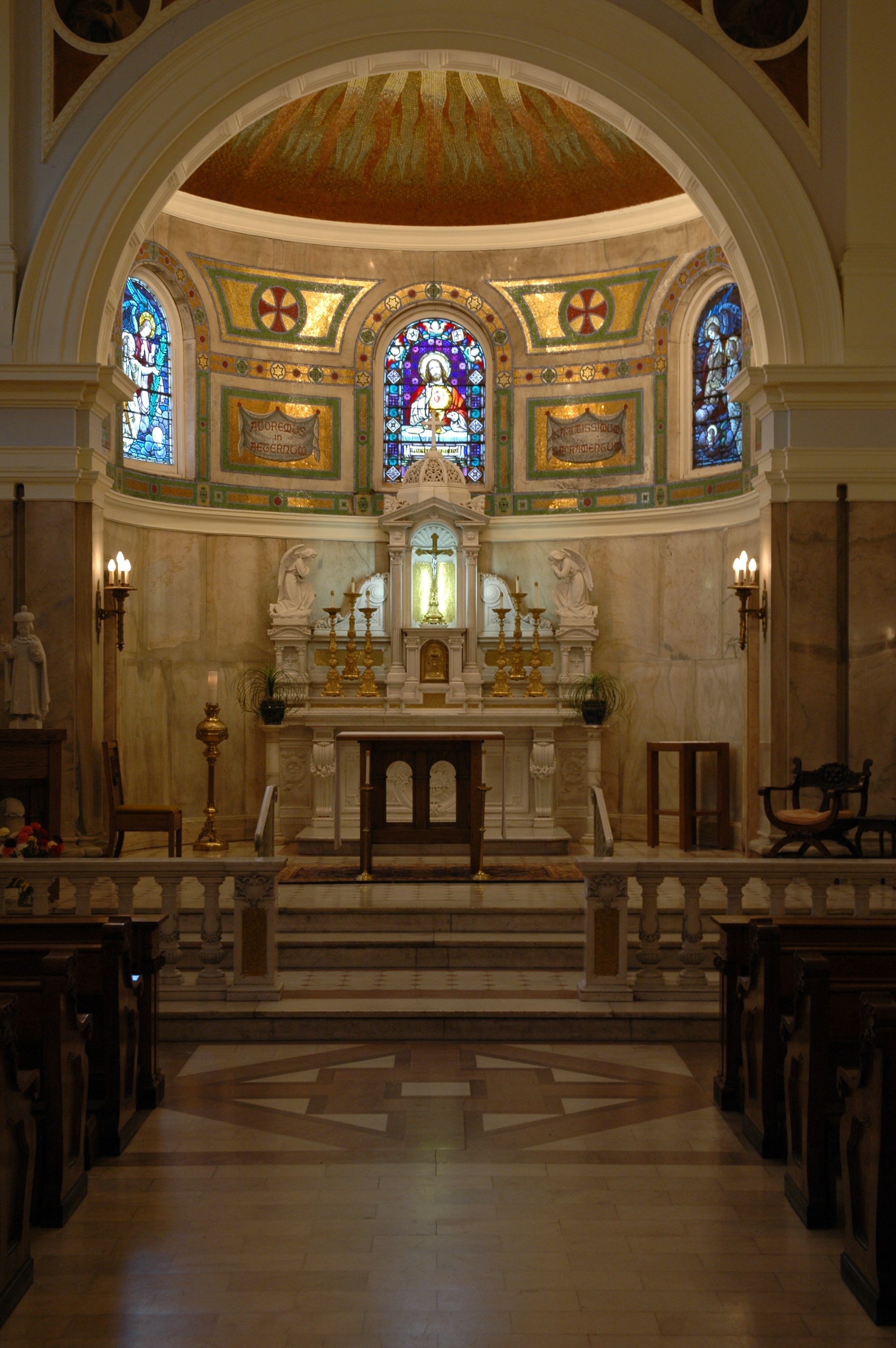 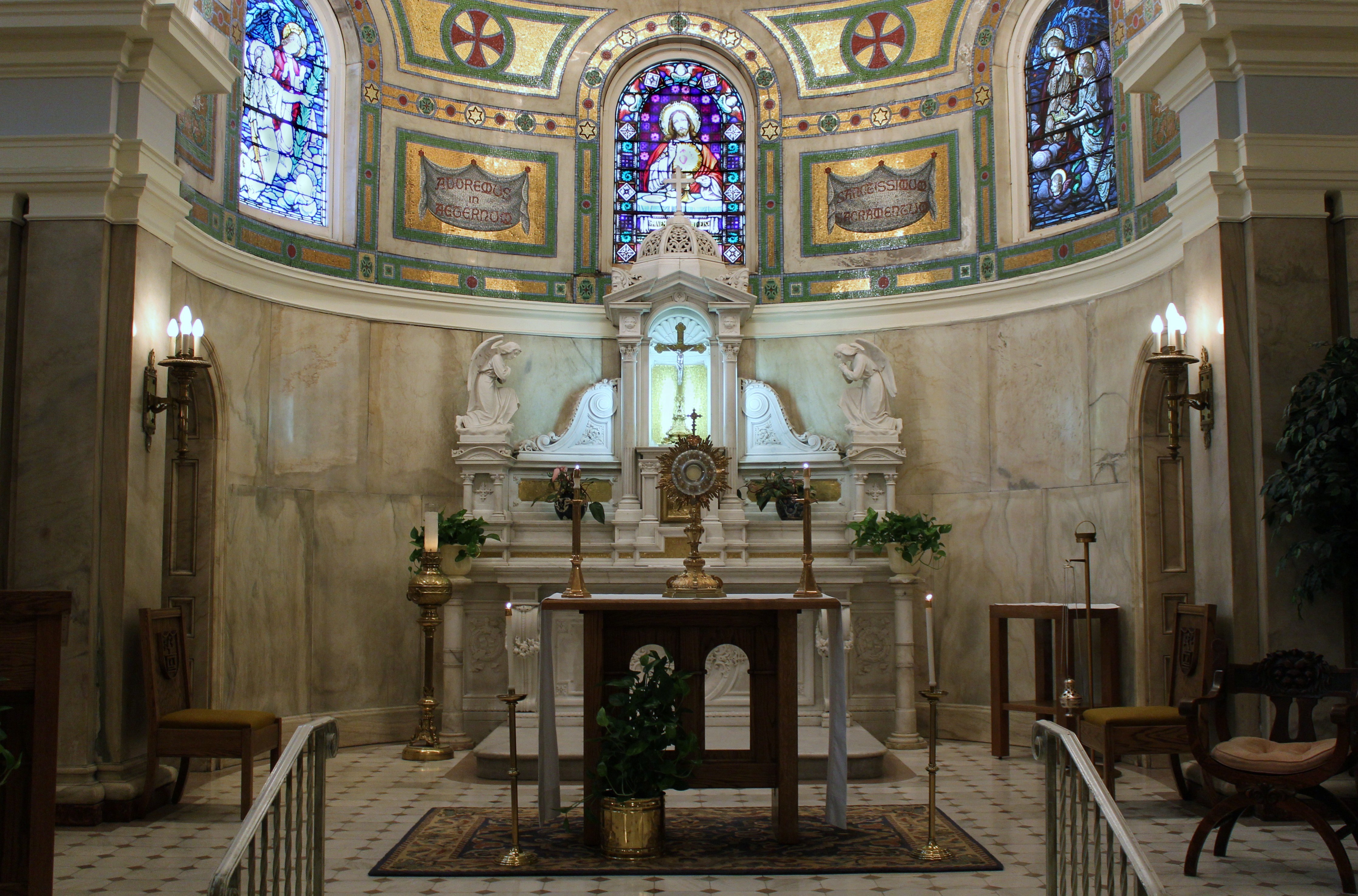 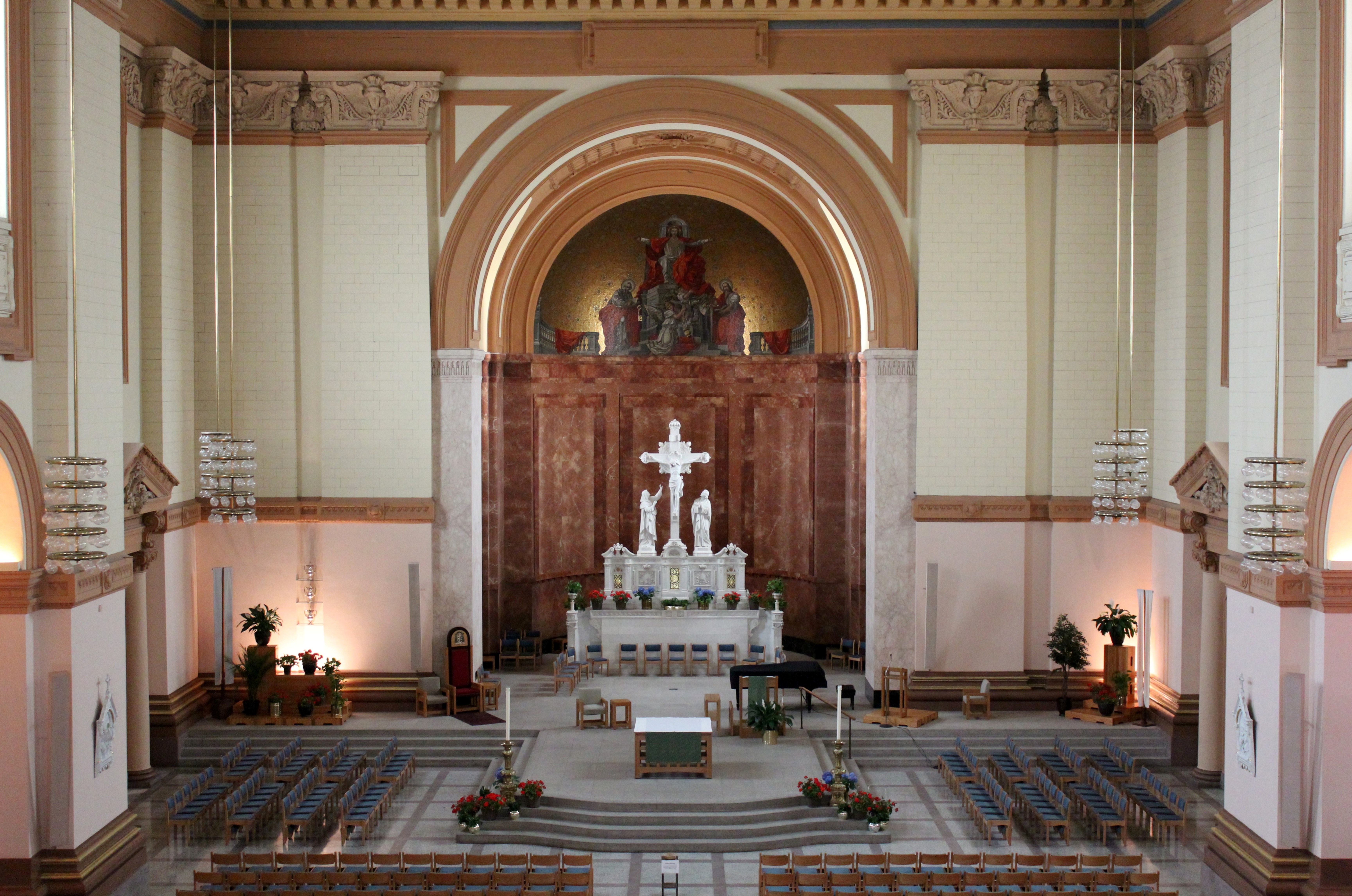 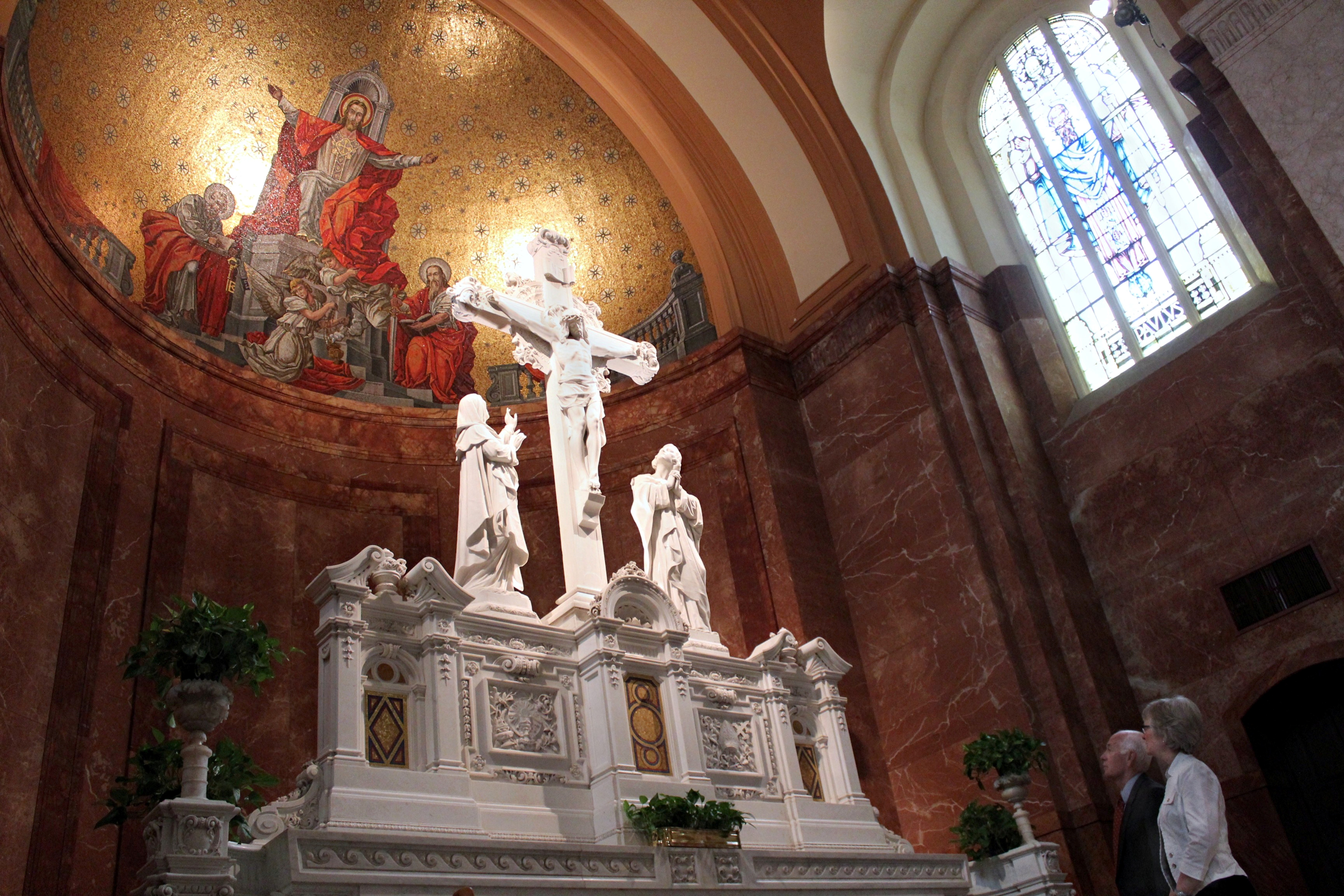 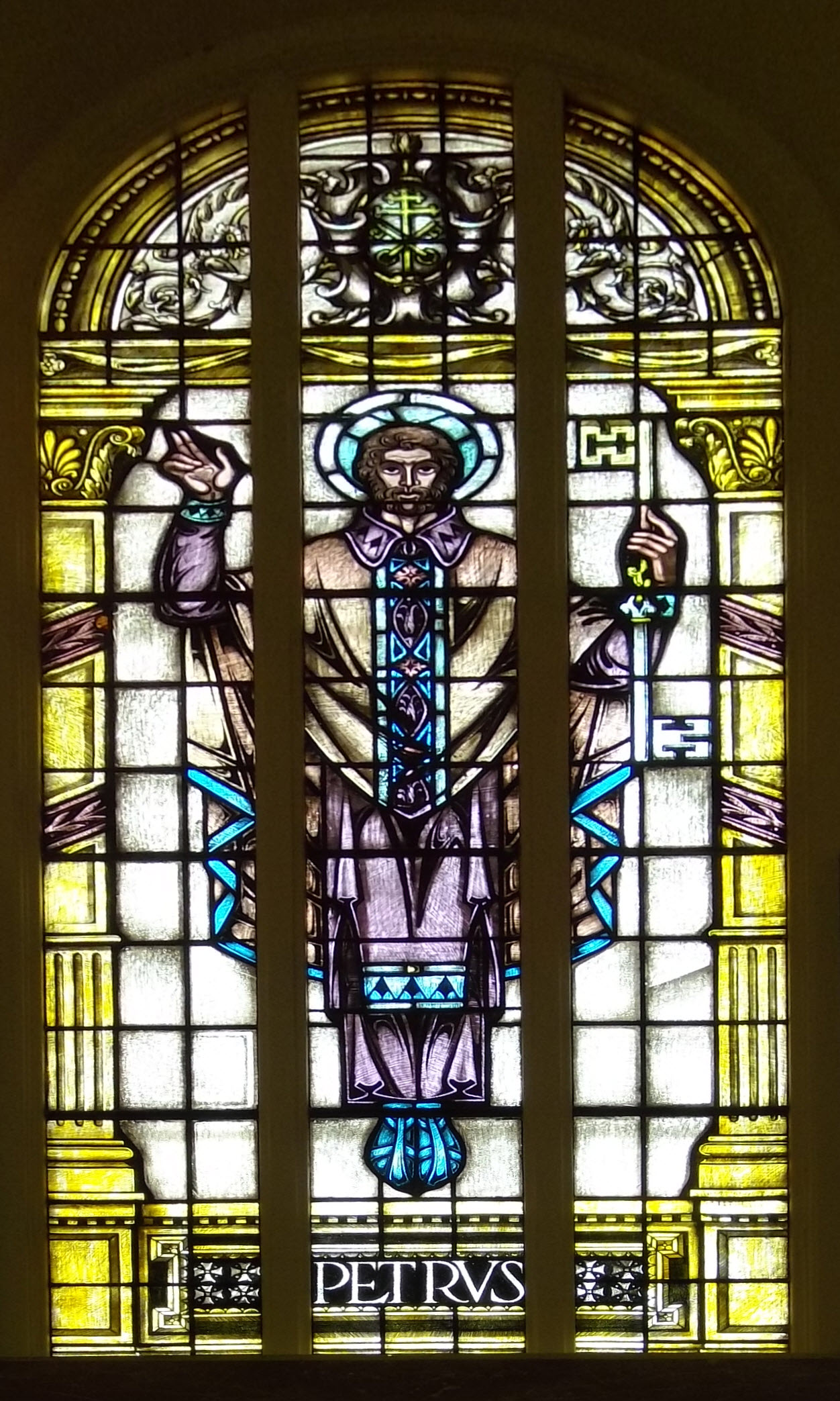 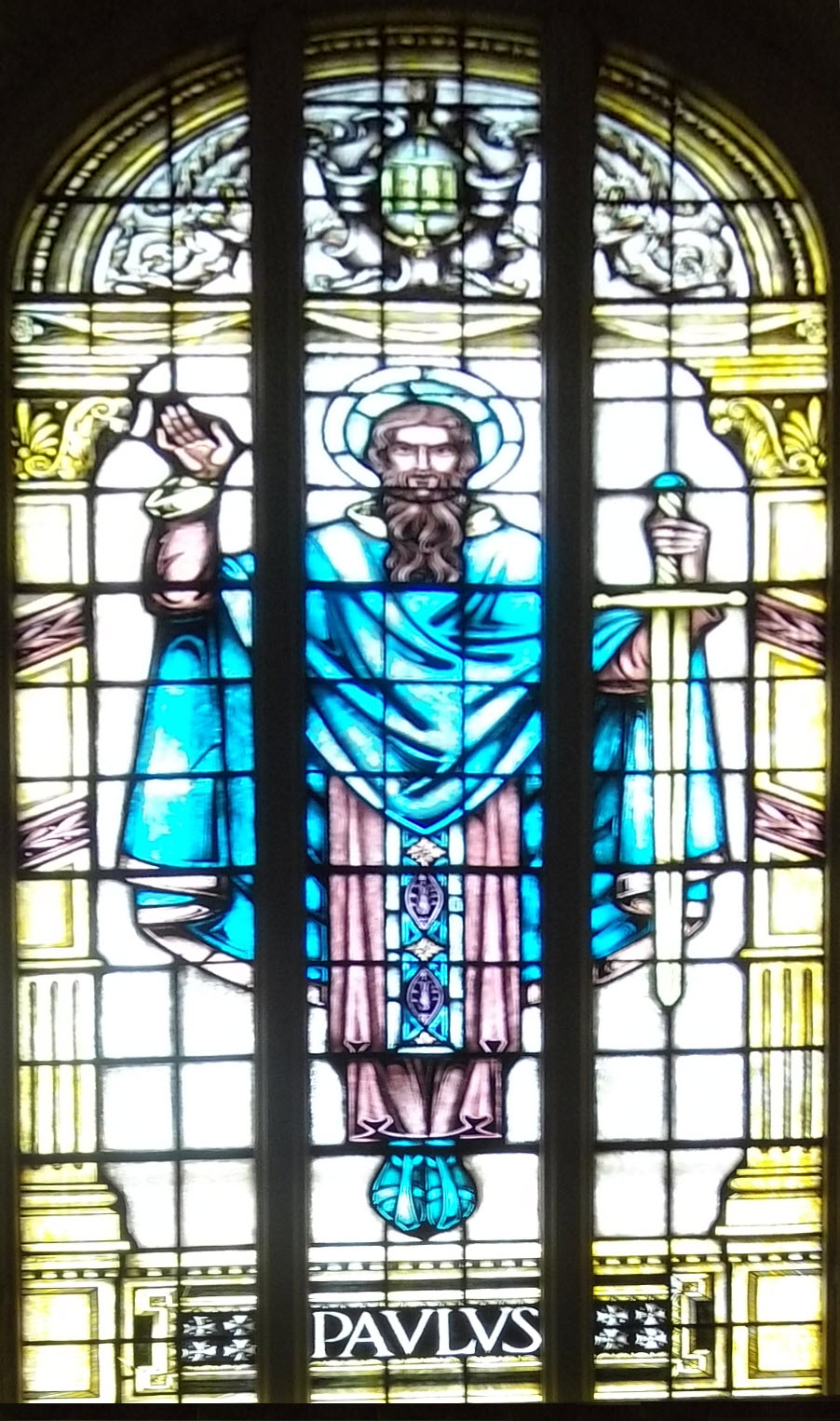 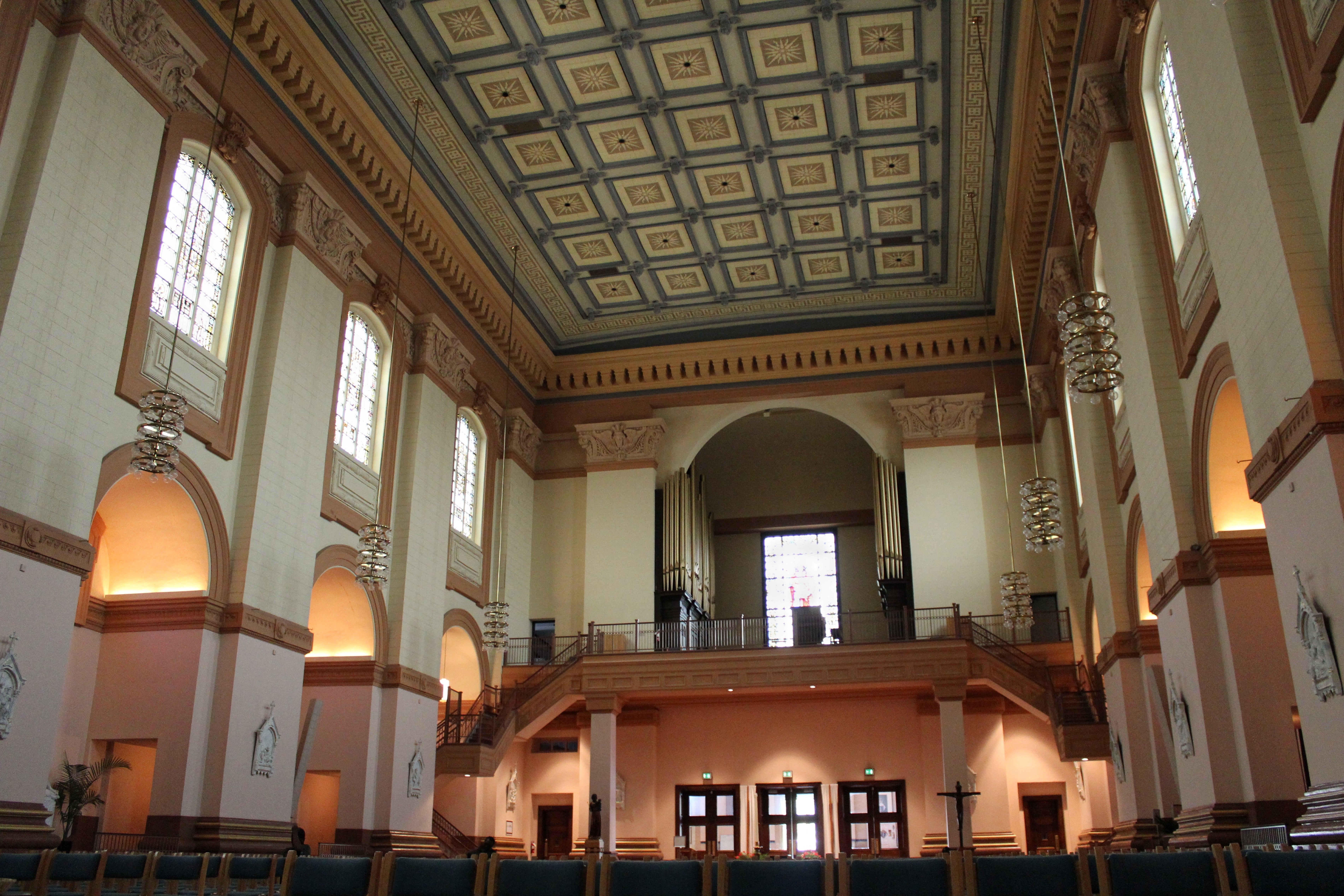 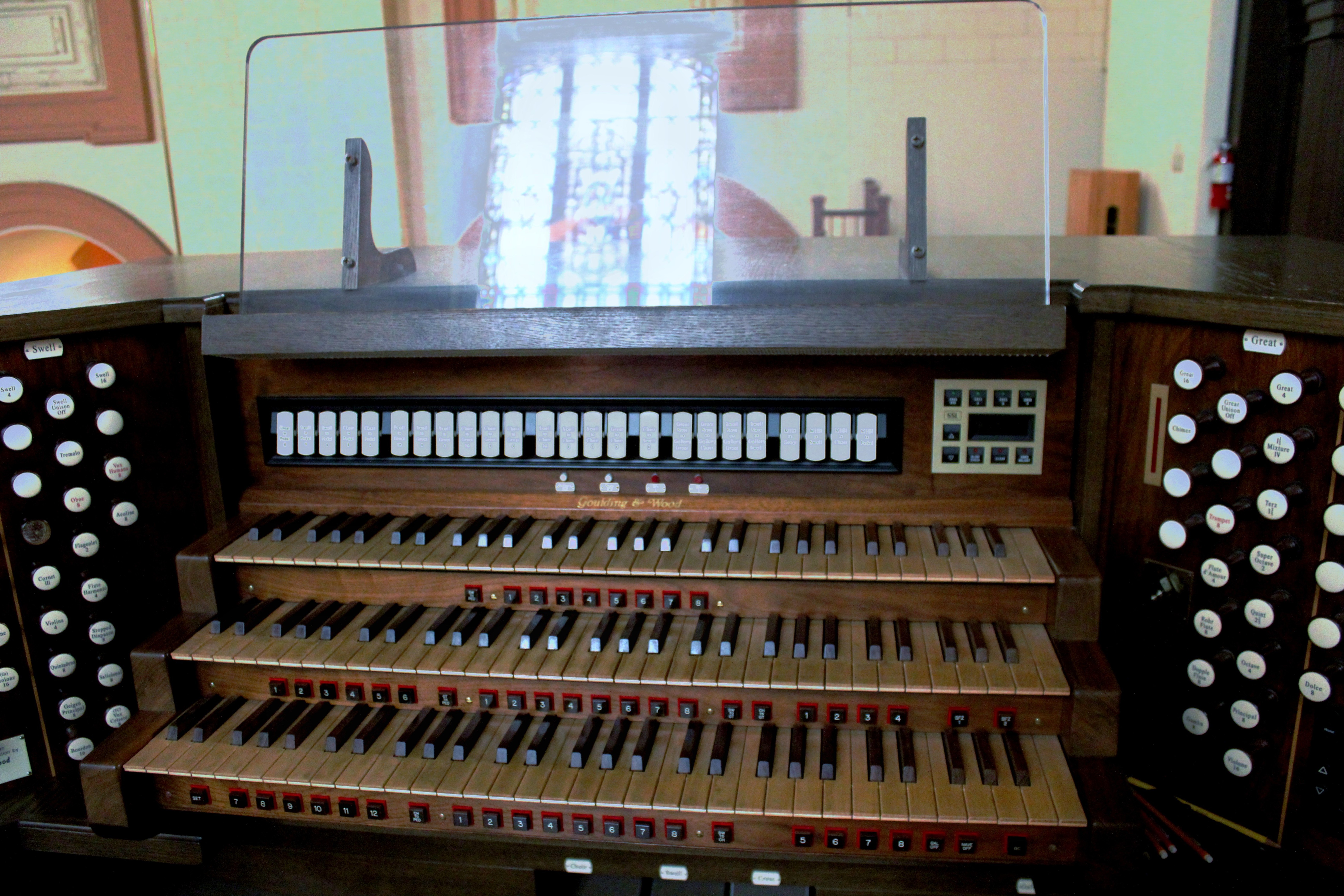 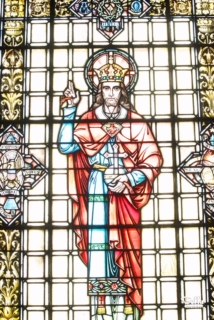 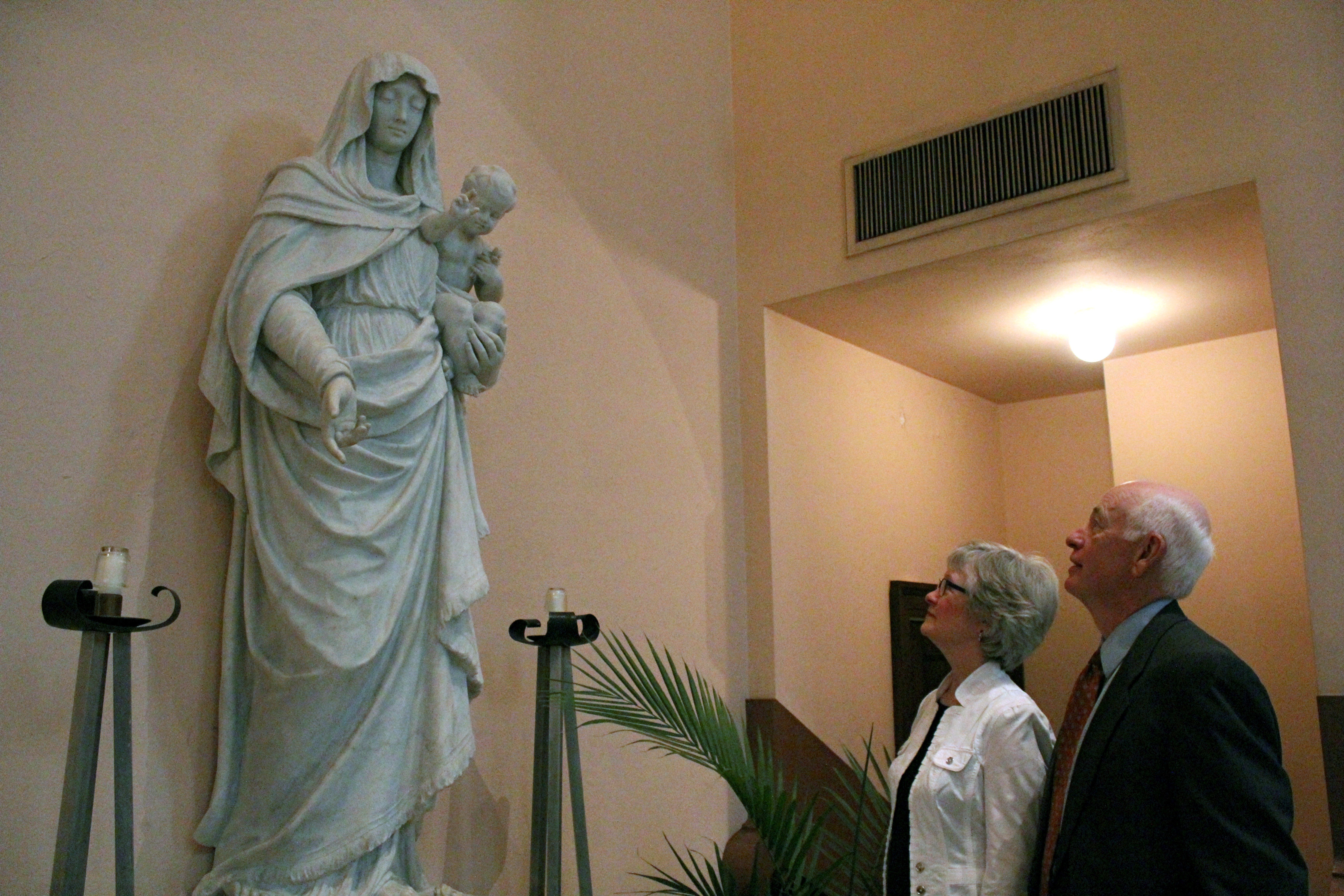 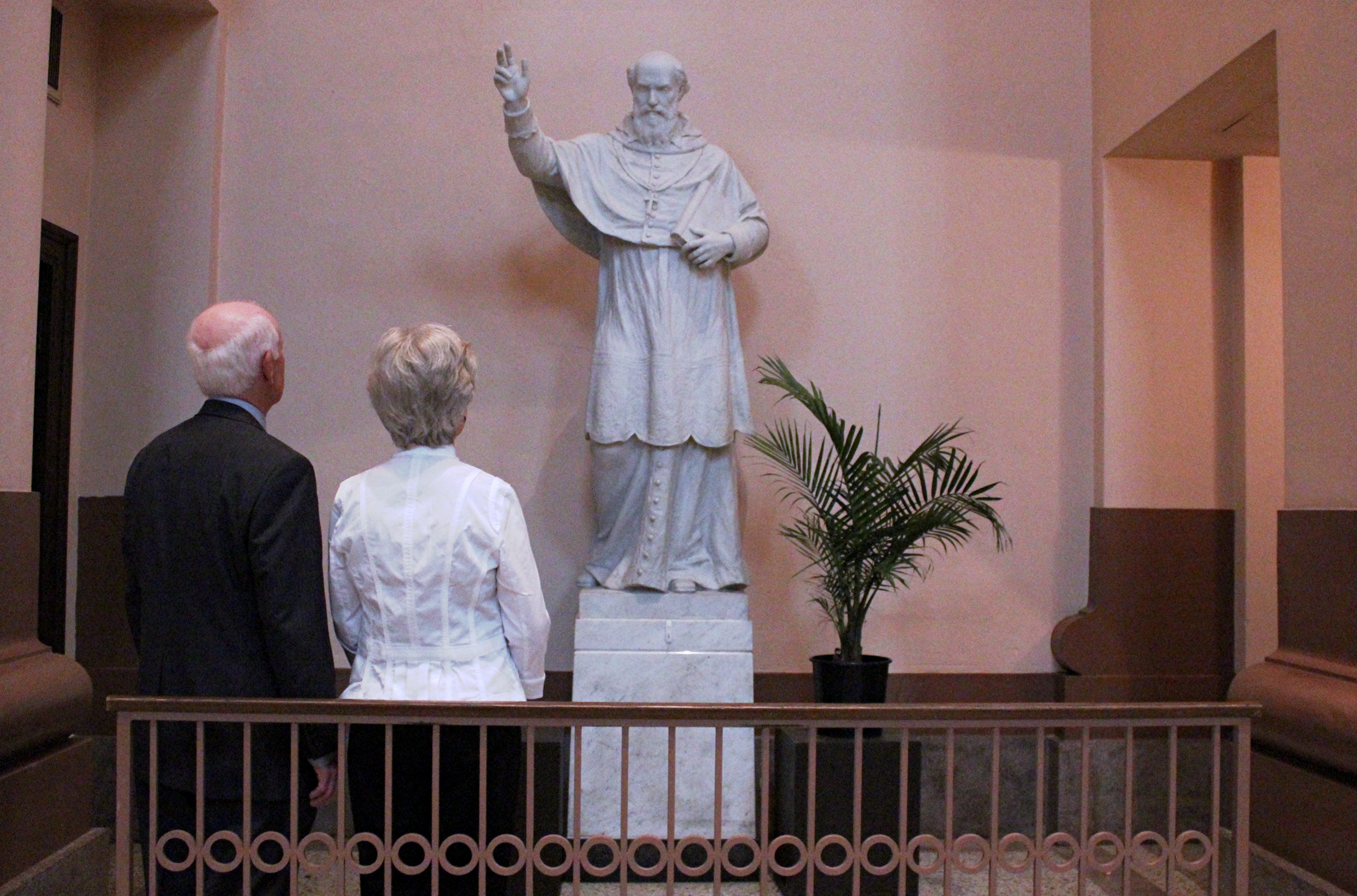 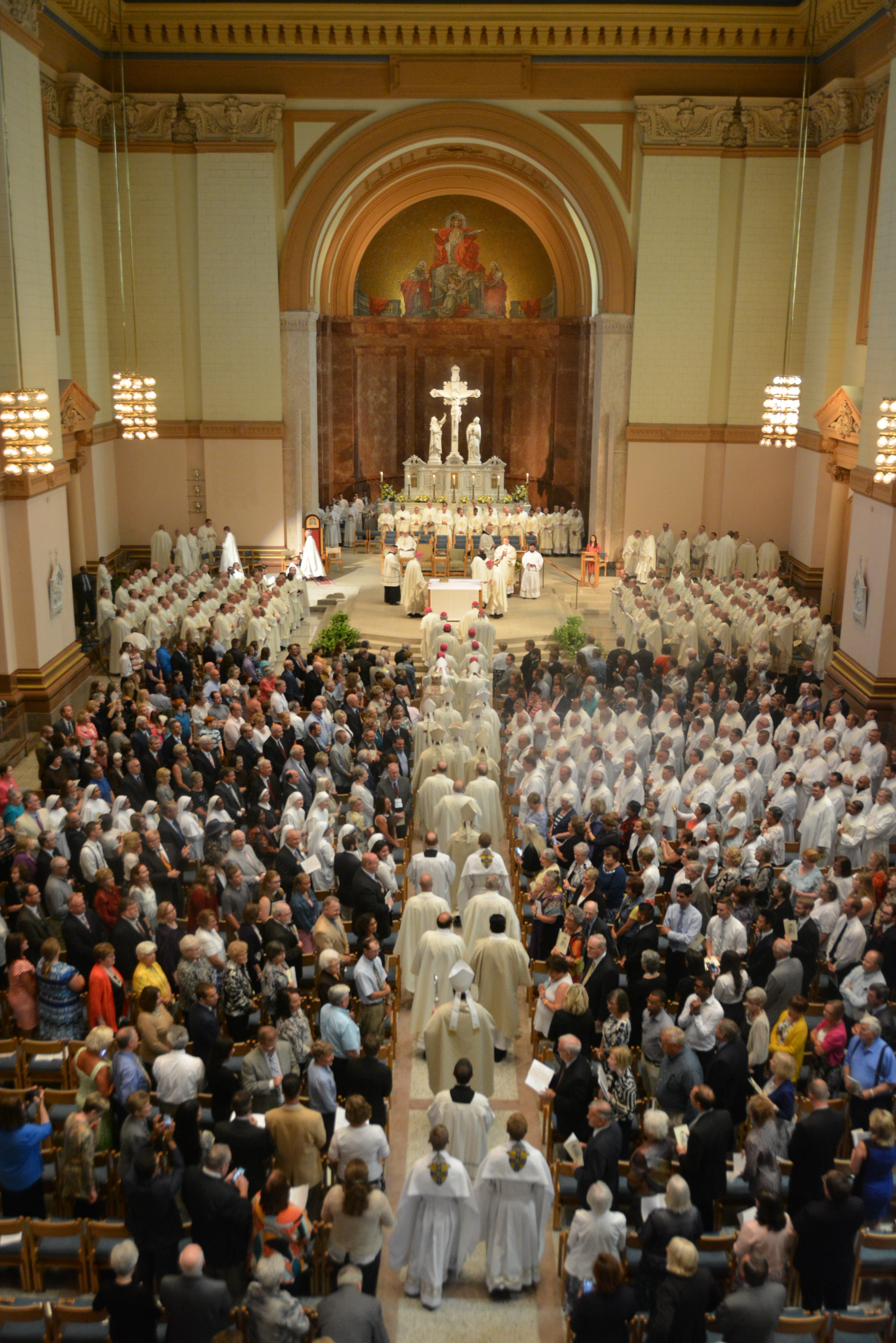 The cathedral itself was renovated for a second time in 1986. A handicap-accessible entrance and elevator was added to the northwest corner of the building, in the location of the former baptistry. The floor of the sanctuary was extended further, and a new altar of oak with a marble top was constructed. The marble cathedra was also replaced with an oak design. The marble pulpit was removed and replaced with an ambo in the sanctuary. The communion rail and side altars were removed, as well as the stations of the cross and altars in the side chapels. The pews were replaced with chairs. A new baptismal font was constructed, integrating pieces of the former communion rail. The renovated cathedral was rededicated on May 14, 1986. 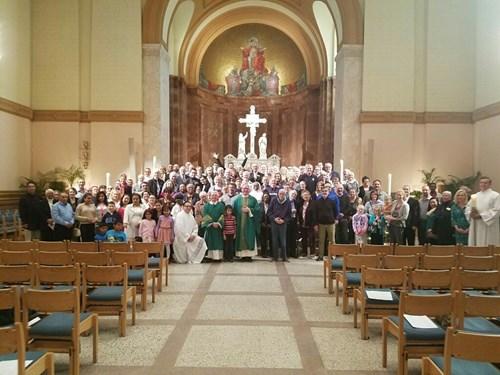 The Blessed Sacrament Chapel and rectory were renovated in 1992. In 1994, nearby St. Bridget Parish was closed, and its members were welcomed to the cathedral parish. Though its membership is small, SS. Peter and Paul cathedral parish continues to remain active through parish organizations, including the St. Vincent de Paul Society, the Knights and Ladies of Peter Claver, bible study, young adult ministry, and the cathedral choir. The cathedral serves as the host for the major liturgical events of the archdiocese, including Chrism Mass and ordinations, and is a popular site for weddings.